Loading...
*** Take the Power Bill Challenge today – you have nothing to lose… but money to gain! - Click here ***

A guide to your home’s Electricity Consumption

What is a Watt?

A watt (W) is a unit of measurement for electricity. Typically:

Typically when we talk about how much electricity a home appliance uses we would talk about watts, for example a 2000W kettle, 1500W toaster or 9W eco lightbulb. For larger appliances we may talk about kilowatts (kW).

Electricity use for the whole country is measured in gigwatts (GW). In 2017 New Zealand consumed around 38,800 GW of electricity. Residential use by 1,720,000 consumers accounted for 32% of the electricity used. 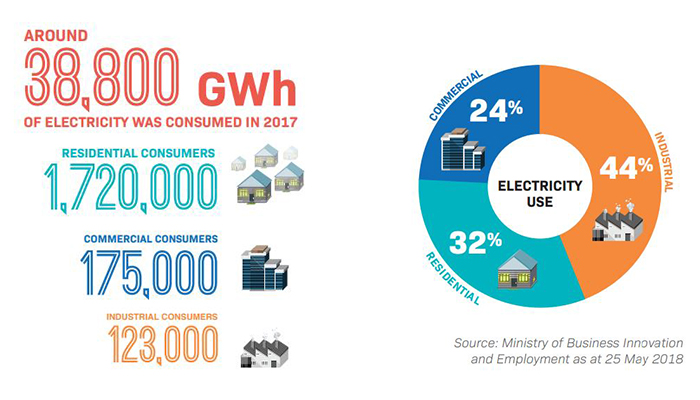 What are Kilowatt hours (kWh)?

In New Zealand when we talk about how much electrical energy or electricity the average household uses we talk about Kilowatt hours (kWh).

A kWh is a measure of how much energy you are using. But, it doesn’t mean the number of kilowatts you’re using per hour. Rather, it represents 1 ‘standard unit’ of electricity, ie: the amount of energy you’d use if you kept a 1,000 watt appliance running for an hour.

A New Zealand house on average uses about 7,000 kWh per year, but the amount varies depending on where in New Zealand you live and how you heat your house and hot water. For example, the Electricity Authority said that in 2017 the average home in the West Coast used 5,870 kWh and the average home in Canterbury used 8,550 kWh. Most homes in the West Coast are heated by fire, and most homes in Canterbury are heated using electricity.

In a recent survey by Power Compare over half (52%) of the respondents said they didn’t know what the kWh usage was for their home.

Are you a low power user or a standard power user?

Knowing how many kWh you use per year determines whether your home should be on a low user plan or a standard user power plan.  Depending on where you live the threshold is 8000 or 9000kWh.

About 23% of customers on a standard plan had a usage level well below the threshold for the scheme. On the other end of the scale, some household who have a relatively high usage pattern are on a low fixed charge plan, which will noticeably increase their bills.

Household on low user plans tend to pay a lower fixed daily charge for their power than those on a standard user plan. But if they go over the low user threshold they tend to pay a much higher rate for each unit of electricity used at the property (kWh). So if you are incorrectly on a low user plan, but use lots of power, your bill will quickly add up.

Check your power bill today to make sure you are on the right type of plan for your home. Think you are paying too much for power?

Over 1 million customers in the North Island can expect some good news in their power bill. The Commerce Commission has announced that Electricity bills for consumers of two electricity...

Low-income families and pensioners will receive a major boost in weekly payments under the government’s $12.1b spending package to support those impacted by COVID-19

The Commerce Commission has released a proposal to lower the revenue caps for Powerco and Wellington Electricity to ‘align’ their price-quality pathways (CPPs) with other regulated lines companies. What could this mean for power customers?...

Are you paying more than the average for power? We're comparing real power bills from New Zealanders. Do you have the best value power provider for your needs?

Who are the top 10 Power Providers in NZ?

Be in to win your electricity bill paid for 3 months!
Complete our short 5 minute survey